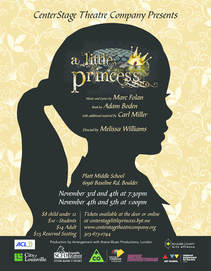 Director: Melissa Williams
Music and Lyrics: Marc Folan
Book: Adam Boden
​
A Little Princess is the adventure of a young girl, whose courage is as big as her heart. When ﻿Sara Crewe﻿ loses everything she holds dear, she uses her imagination and her perseverance to survive, with the grace of a real-life princess, proving to all that if you are kind, brave and true, anyone can be a princess.

Buddy, a young orphan, mistakenly crawls into Santa's bag of gifts and is transported to the North Pole. The would-be elf is raised, unaware that he is actually a human, until his enormous size and poor toy-making abilities cause him to face the truth. With Santa's permission, Buddy embarks on a journey to New York City to find his birth father and discover his true identity. Faced with the harsh reality that his father is on the naughty list and that his half-brother doesn't even believe in Santa, Buddy is determined to win over his new family and help New York remember the true meaning of Christmas.

Jeremy Heere is just an average teenager. That is, until he finds out about “The Squip” – a tiny supercomputer that promises to bring him everything he desires most: a date with Christine, an invite to the raddest party of the year and a chance to survive life in his suburban New Jersey high school. But is being the most popular guy in school worth the risk?


​This beloved tale, in which a Kansas farm girl travels over the rainbow to discover the magical power of home, has been entertaining audiences for generations.

​In a Berlin nightclub, as the 1920’s draw to a close, a garish Master of Ceremonies welcomes the audience and assures them they will forget all their troubles at the CABARET. With the Emcee’s bawdy songs as wry commentary, CABARET explores the dark, heady, and tumultuous life of Berlin’s natives and expatriates as Germany slowly yields to the emerging Third Reich. Cliff, a young American writer newly arrived in Berlin, is immediately taken by English singer Sally Bowles. Meanwhile, Fräulein Schneider, proprietor of Cliff and Sally’s boarding house, tentatively begins a romance with Herr Schultz, a mild-mannered fruit seller who happens to be Jewish.
​ 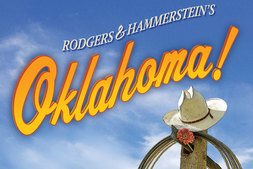 
​​
​CenterStage’s Tapestry is Boulder County's premier all-abilities theatre company providing local youth the chance to shine on stage. Tapestry casts actors with special needs in lead roles, and peer actors as understudies and support creating a shared theatrical performance. By cultivating a welcoming, safe, and inclusive community, we ensure everyone has fun experiencing the magic of theatre. Our participants discover talents they never knew they had, make connections with people who have diverse interests and abilities, and form long-lasting friendships. By challenging societal perceptions and showcasing everyone’s strengths, we continue to embrace our philosophy of “Applauding All Abilities.”

Let Curley, Laurey, Will, Ado Annie, Aunt Eller and the entire Tapestry Theatre cast entertain and inspire you with one toe tappin' song after another.  Buying tickets is as easy as riding a surrey with the fringe on top.  You Can't Say No!!

WORKING: The Musical
August 2018
Louisville Center for the Arts


The hopes, dreams, joys and concerns of the average working American are the focus of this unique, extraordinary musical. WORKING was updated in 2012 to be relevant to jobs today and includes two new songs by Lin-Manuel Miranda.