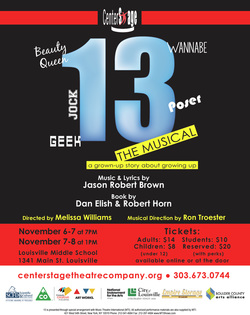 Evan Goldman is plucked from his fast paced, preteen New York City life and plopped into a sleepy Indiana town following his parents divorce. Surrounded by an array of simpleminded middle school students, he needs to establish his place in the popularity pecking order. Can he situate himself on a comfortable link of the food chain or will he dangle at the end with the outcasts?! 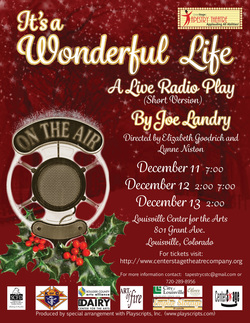 This beloved American holiday classic comes to captivating life as a live 1940s radio broadcast. With the help of an ensemble that brings a few dozen characters to the stage, the story of idealistic George Bailey unfolds as he considers ending his life one fateful Christmas Eve. 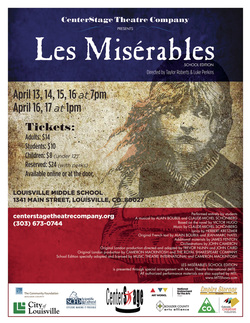 In 19th century France, Jean Valjean is released from years of unjust imprisonment, but finds nothing in store for him but mistrust and mistreatment. He breaks his parole in hopes of starting a new life, initiating a life-long struggle for redemption as he is relentlessly pursued by police inspector Javert, who refuses to believe Valjean can change his ways. Finally, during the Paris student uprising of 1832, Javert must confront his ideals after Valjean spares his life and saves that of the student revolutionary who has captured the heart of Valjean's adopted daughter. 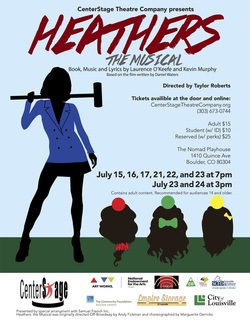 Based on the classic 1989 film, Westerberg High is ruled by a shoulder-padded, scrunchie-wearing junta: Heather, Heather and Heather, the hottest and cruelest girls in all of Ohio. But misfit Veronica Sawyer rejects their evil regime for a new boyfriend, the dark and sexy stranger J.D., who plans to put the Heathers in their place — six feet under. 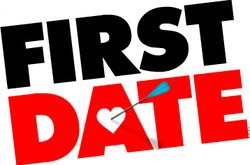 When blind date newbie Aaron is set up with serial-dater Casey, a casual drink at a busy New York restaurant turns into a hilarious high-stakes dinner. As the date unfolds in real time, the couple quickly finds that they are not alone on this unpredictable evening. In a delightful and unexpected twist, Casey and Aaron’s inner critics take on a life of their own when other restaurant patrons transform into supportive best friends, manipulative exes and protective parents, who sing and dance them through ice-breakers, appetizers and potential conversational land mines. Can this couple turn what could be a dating disaster into something special before the check arrives? 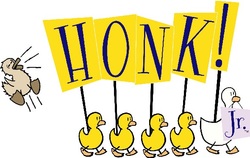 Ugly looks quite a bit different from his darling duckling brothers and sisters. The other animals on the farm are quick to notice and point this out, despite his mother's protective flapping. Feeling rather foul about himself, the little fowl finds himself on an adventure of self-discovery, all the while unknowingly outwitting a very hungry Cat. Along the way, Ugly meets a whole flock of unique characters and finds out being different is not a bad thing to be. 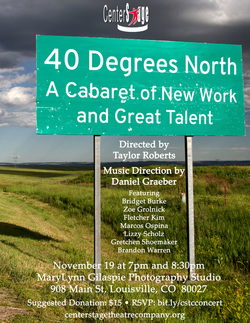 New York's musical theatre scene is booming with talented composers writing new songs practically every day. CenterStage Theatre Company is excited to bring that fresh sound to Colorado with a cabaret of songs that you've probably never heard before. Performed by some of the best young actors in the Boulder area, this concert includes tunes by Kerrigan & Lowdermilk, Joe Iconis, Kooman & Dimond, O'Keefe & Murphy, Ryan Scott Oliver, Saltzman & Cunningham, Will Van Dyke, Drew Gasparini, and Jonathan Reid Gealt. Packed with hilarity, heartbreak, teen angst, and unbridled joy, the set list promises to set your toes tapping and get you excited about the future of this amazing genre. 40 Degrees North is unparalleled along the 40th parallel! 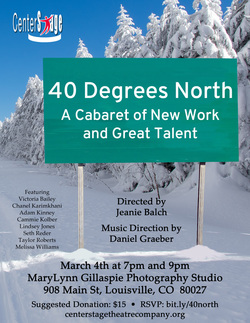 New work is driving musical theatre into the future, with cutting-edge composers and lyricists telling engaging and memorable stories through song. CenterStage Theatre Company is excited to bring that fresh sound to Colorado with a concert of songs that you've never heard before. Our next 40 Degrees North cabaret features the work of Benjamin Velez and Kathryn Hathaway—including a suite of songs from their musical in development, Afterland—performed by several of CenterStage's talented adult actors. With an array of tunes that will leave you clamoring for more, 40 Degrees North is unparalleled along the 40th parallel! 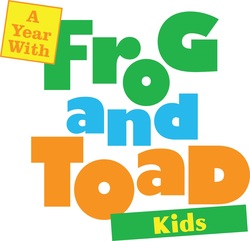 Waking from hibernation in the Spring, Frog and Toad plant gardens, swim, rake leaves, go sledding, and learn life lessons along the way. The two best friends celebrate and rejoice in the differences that make them unique and special. Part vaudeville, part make believe, all charm, A Year With Frog And Toad, Kids tells the story of a friendship that endures throughout the seasons.
For more information on CenterStage Theatre Company, contact us at
info@centerstagetheatrecompany.org or 720-933-9586