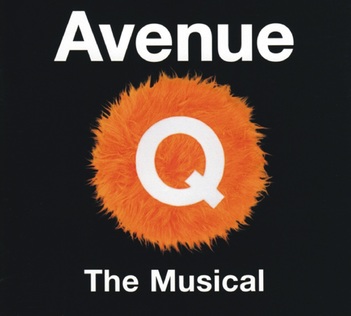 July 30th & August 1st, 2nd, 6th, and 8th at 7:30pm
July 31st & August 7th at 9:30pm (Late-nite shows after the Street Faire)
August 9th at 3:30pm
The Louisville Arts Center
801 Grant Ave, Louisville, CO 80027
Click here to purchase tickets.
When bright-eyed and naive college grad Princeton follows his dreams to New York City, he realizes the only place he can afford to live is the far-flung neighborhood of Avenue Q. He soon meets his wacky neighbors — Brian, the struggling comedian, and his fiancée Christmas Eve; the kind-hearted Nicky, and his tightly-wound roommate Rod; Trekkie Monster, the Internet addict; and a cute girl named Kate, who might be able to help Princeton find his elusive purpose in life. And it just so happens that his superintendent is the one and only Gary Coleman. Together, these oddballs experience the sometimes-hilarious, sometimes-frustrating ups and downs of life in the big city.

Puppets by All Puppet Players
For more information on CenterStage Theatre Company, contact us at
info@centerstagetheatrecompany.org or 303-529-2782