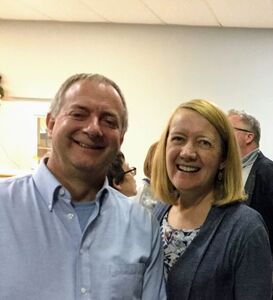 Please take a minute to read this wonderful and moving interview with CSTC's Techinical Director, Terry Koelling, who has been involved in helping behind the scenes at CSTC for 16 years! We are forever grateful for all of our CenterStage families and supporters during this holiday season and throughout the year!

When did you first become involved in CenterStage and why?
My daughters were cast in a CenterStage show and I helped with the load in of the set. When I saw all the parent involvement, I noticed there was a lot more technology required than I had imagined. I had no desire to get on stage, or be backstage, but I could help string cables to speakers, and change batteries in microphones, so I did. It was a way to stay involved with my daughters as they spent more time in rehearsal as each new role grew. After several shows, and about a year later, my involvement increased to help run sound for the current show. I was having more fun helping with tech than I expected. I was asked to take over as CenterStage’s Technical Director and to join the Board of Directors.

What is one of your first or best memories of a CenterStage or CSTC Tapestry play?
I say in my biography in the play bill that I want to provide the best sound and lights so the actors can bring their characters to life in front of an appreciative audience. In my role, I usually become involved in the later stages of the show, just before load in, and miss a lot of the bonding between the actors and the directors. And in life you never really know what people are struggling with. It is the same with our young actors.

There was a young male actor in a lead role that had recently lost his mother and was moving between various stages of grief. He was having trouble with his role where he had to be very angry and mean to the lead actress. It really upset him to try and find that emotion within himself and be that person. I watched from a distance as he worked with the director to isolate his pain and loss, and develop the character that was required at that time, and to pull off a role of anger and hate. He ended up doing a wonderful job, without many people knowing the pain that role caused within him.

Whether a CenterStage or Tapestry show, the kids get on stage in front of people they know and don’t know, and risk more than I am willing to give of myself. That always amazes me.

In what ways have you stayed involved with CenterStage? What does your job entail?
As Technical Director, I oversee the technical aspects of each show, related to lights and sound, in the performance venue. I am responsible for providing the equipment the directors want to use and getting it to work in the space we have available. I work towards solving problems before or as they occur. Each show has its own set of individuals involved in tech so my role may be manager, designer, operator, or backup. I oversee the equipment for proper care, operation, and safety since we have a large investment in lights and sound. I try to be as helpful as possible to the director so they don’t need to worry about tech working for the show.

What is your favorite thing about working for CenterStage?
My favorite thing is the magic that occurs between a disastrous final rehearsal and the show that occurs in front of a live audience. It amazes me the growth that happens between those two points. That magic is the result of hard working directors, designers, cast and crew and it is wonderful being a part of the process.

If someone asked you why you give to CenterStage, what would you tell them?
A favorite teacher once told a group of parents, me included, that performance is the most important skill an adult can have to succeed in life. I never knew that growing up and it has cost me in my own confidence. To grow as a performer you need a place to practice and fail and succeed. CenterStage provides that. I am proud to participate in the growth of these young people, whether by my small donation or lighting them up in their final bows. I believe the approval by the audience, encourages each actor to do more, and become more than they could have, if not involved with CenterStage.