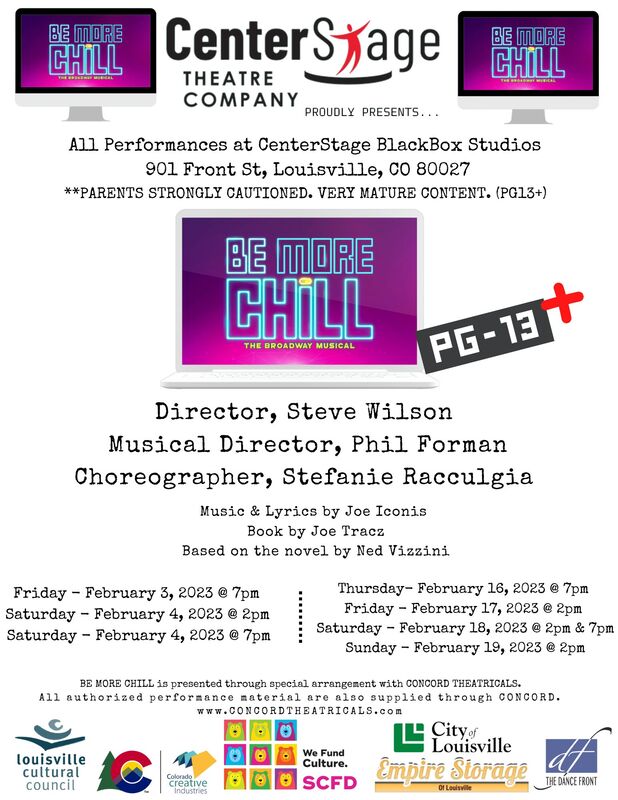 Get ready for an irreverent adventure as CenterStage dives deep into the teen experience with the edgy cult musical Be More Chill. The show features a cast of diverse misfits who ooze personality and smarts. Jeremy Heere is an average, awkward, anxiety-ridden teenager attending a suburban New Jersey high school. Nerdy and unpopular, Jeremy moves through his day wishing he could be one of the cool kids. That is, until he finds out about "The Squip," a tiny supercomputer that promises to bring him everything he desires most: a date with the amazing Christine (star of the drama department), an invite to the raddest party of the year and a chance to thrive as the most “chill” dude on campus. But is being the most popular guy in school worth the risk?

Be More Chill is based on the novel by Ned Vizzini and premiered on May 30, 2015. The show's cast recording gained a huge following online, reaching the Top 10 of Billboard's Cast Album chart in July 2017. After a run off-Broadway, Be More Chill opened on Broadway at the Lyceum Theatre on March 10, 2019.

Be More Chill is presented through special arrangement with Concord Theatricals.
All authorized performance material are also supplied through Concord.
www.concordtheatricals.com
For more information on CenterStage Theatre Company, contact us at
info@centerstagetheatrecompany.org or 303-529-2782